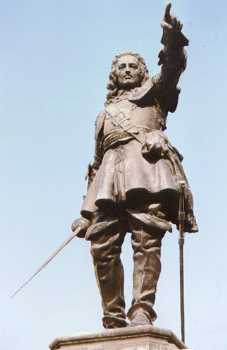 On the outbreak of the Civil War, John Hampden and his lifelong friend Arthur Goodwin raised a regiment of foot and horse respectively from their Buckinghamshire and Oxfordshire tenants. Tradition has it that the muster took place on Chalgrove Field. Hampden’s regiment were known as ‘The Greencoats’ from the colour of their jackets.

As Deputy-Lieutenant for Buckinghamshire one of Hampden’s earliest actions was to arrest the Earl of Berkshire and the King’s Commissioners of Array. He then took part in the relief of Coventry but missed Edgehill as his regiment was escorting the artillery train. 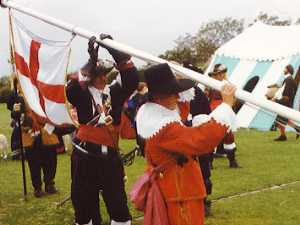 Hampden’s eagerness, as a soldier, to pursue any military advantage was allied to his refusal, as a politician, to accept any peace on unfavourable terms. “Without doubt”, wrote Clarendon, “when first he drew the sword he threw away the scabbard”

Hampden was privately critical of the Earl of Essex’s strategy, feeling that he should attack Oxford, but as Essex’s Chief of Staff he supported the Lord General (left) loyally, taking part in the siege and capture of Reading. He was even spoken of as a possible successor to the more cautious Earl.

The Earl of Essex

Prince Rupert of the Rhine

When Essex finally moved against Oxford and quartered his army at Thame, the King’s nephew Prince Rupert (above right) led two thousand men out of the city in a night sortie, beating up the Parliamentary outposts at Postcombe and Chinnor, before turning southwards towards Chalgrove and Stadhampton. 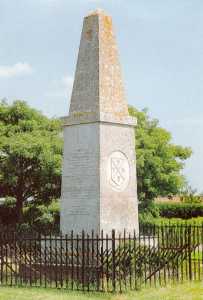 The Hampden Monument at Chalgrove, marking the site of the battle

Sending a message to Essex requesting him to cut off the Prince’s retreat at Chislehampton Bridge, Hampden, who had probably been visiting the Parliamentary outposts, rallied the various bodies of troops that had been skirmishing with the Royalist rear and pursued them with vigour.

Early on the morning of Sunday 18th June 1643 Rupert halted his main force in a field near the village of on Chalgrove and ambushed the pursuing Parliamentarians. In the ensuing battle Hampden was shot in the shoulder.

Although seriously wounded he rode to the nearby town of Thame where he died on 24th June, his wedding anniversary, in the house of Ezekiel Browne. The building later became the Greyhound Inn. 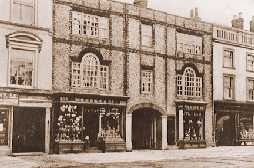 The former Greyhound Inn in Thame in 1908

John Hampden’s body was escorted back to Great Hampden by soldiers from his Greencoat regiment. He was buried among his ancestors in the Church of St. Mary Magdalene.

Hampden’s character and abilities were praised by friend and foe alike. “Never Kingdom received a greater loss in one subject”, wrote one contemporary, and Clarendon said that he had “the most absolute faculties to govern the people of any man I ever saw”. 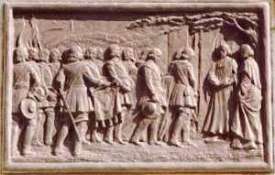 Perhaps John Hampden’s character and achievements were best summed up by his oldest friend, Arthur Goodwin, who wrote, “he was a gallant man, an honest man, an able man, and take all, I know not to any man living second… I would lay it to heart that God takes away the best amongst us”. 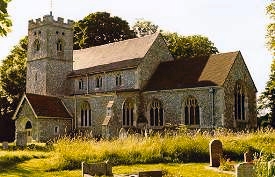