This year’s AGM was held in the magnificent surroundings of Hampden House. Some 22 members attended the meeting some of whom had travelled significant distances. We were specially pleased to welcome Patricia Claus and David and Lilian Gillie, who had made a special journey from the United States of America.

The meeting (below) was opened with a brief speech by Chairman Steve Barriff in which he praised the devotion of the committee members and in particular Brian Cox, who has decided to stand down after a number of years as a trustee and membership secretary. 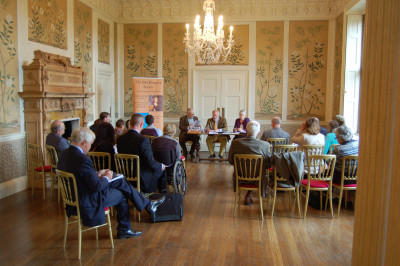 All the main committee officers were re-elected and the committee were particularly pleased to welcome new trustee Gerald McGregor into the fold. After the main business of the AGM Gerald was kind enough to give a brief talk about the defences of London during the Civil War.