Hampden’s reputation continued to grow in the centuries after his death, occasionally in quite surprising ways. Not only were towns in the USA, New Zealand and Zimbabwe (Rhodesia) named after him but so to were an electric locomotive on the London Underground and a WW2 RAF bomber. Scotland’s national soccer team plays its international home matches at Hampden Park whose name originally derived from a street called Hampden Terrace that was named for the Patriot.

After the Restoration the Whig/Country faction adopted Hampden as a proto-martyr for the radical cause of constitutional monarchy and parliamentary government.

The American Colonists were well aware that they were following in Hampden’s footsteps with their rebellion against the Crown. The rallying cry of “no taxation without representation” was first used in a letter to a Boston newspaper signed ‘John Hampden’. The Hampden-Sydney College of Virginia preserves this connection in its name and traditions.

In the early nineteenth century several British cities saw the formation of political associations known as Hampden Clubs to discuss much needed constitutional reform. This use of Hampden’s name drew on the memory of his role in the re-enfranchisement of three Buckinghamshire boroughs. It is ironic that Hampden’s own Wendover seat had become a notoriously “rotten borough” and was disenfranchised even before the 1832 Reform Act so that its two seats could be reallocated to Manchester. 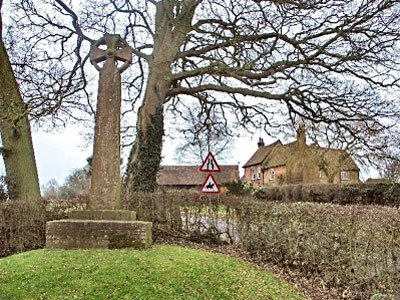 The Ship Money Monument was erected in 1863 at Honor End, near Prestwood by Lord Chief Justice William Erle. This rather inappropriate celtic cross stands on ground that belonged to the Hampden Estate and formed part of the land on which Hampden’s Ship Money Tax was levied.

During the American War of Independence a ship called the ‘Hampden’ operated as a privateer attacking British merchant shipping. In March 1779 the ‘Hampden’ sailing out of Brest encountered the ‘Bridgewater’ a well armed British East Indiaman in mid-Atlantic. The ensuing battle lasted three and a half hours. Both ships were severely damaged but managed to reach their home ports. The battle was immortalised in a painting by Francis Holman commissioned by the Captain of the ‘Bridgewater’ William Parker. This painting is the second earliest representation of the American flag in art and the oldest in maritime art. 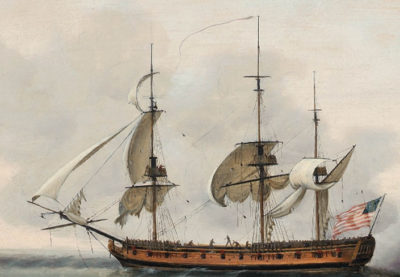 Hampden’s statue stands at the entrance to the Central Lobby in the modern Houses of Parliament. It is sited close to the spot from which Speaker Lenthall addressed the King when he came to arrest Hampden and the other five members in 1642.

In the early years of the twentieth century the campaign for women’s suffrage developed into a broad mass movement.

One group, the Women’s Tax Resistance League, adopted Hampden as their figurehead. They saw in his stand against the illegal Ship Money Tax a precursor of their own struggle not to pay taxes imposed by a Government that they could neither help elect nor be members of.