The Commemorative Ceremony in Thame

Although within a few months of its formation the Society was instrumental in helping to raise money to restore the Hampden memorials in Great Hampden church, which were in danger of coming away from the wall, its first major event was on 24th June 1993 when a Commemorative Ceremony was held in Thame to mark the 350th anniversary of John Hampden’s death. 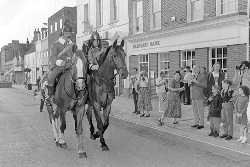 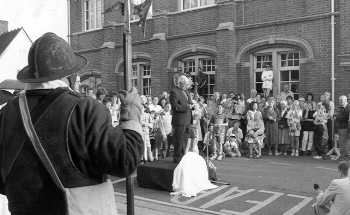 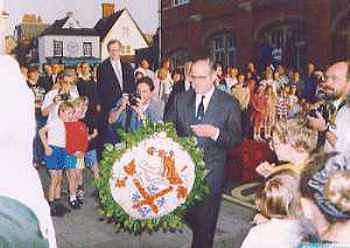 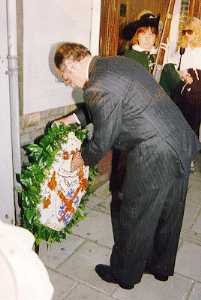 Two horsemen (top left) re-enacted the arrival of the wounded Hampden and his companion Arthur Goodwin from the Battle of Chalgrove Field; a short service (top right) was held by Bishop Richard Watson, President of Thame Historical Society; and the Earl of Buckinghamshire (a descendant of Hampden) laid a specially made wreath of dried flowers (above) at the memorial on the former Greyhound Inn, where his ancestor died.